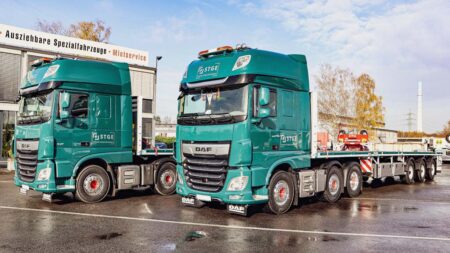 Convenient location on the Rhine-Herne Canal

STGE GmbH has been part of STL Logistik AG since the summer of last year. We have a long and successful working relationship with STL. Because it wasn’t that long ago, we particularly remember the elaborately designed ES-GE jumbo semi-trailer that we delivered to STL Logistik AG last year. But STGE is also no stranger to us. The four letters stand for “Schwerlast-Terminal-Gelsenkirchen” – which means “Heavy-Duty Terminal Gelsenkirchen”. Originally known under the name “Siefert Schwertransporte GmbH”, the traditional company specializing in large-capacity and heavy-duty transport has remained loyal to our neighboring city of Gelsenkirchen, but now appears under a different name. For STL Logistik AG from Haiger, there are strategic advantages, among other things, thanks to the direct connection to the Rhine-Herne Canal and its own handling facility for heavy goods. Furthermore, the STGE GmbH site has a track connection to the rail network of Deutsche Bahn. 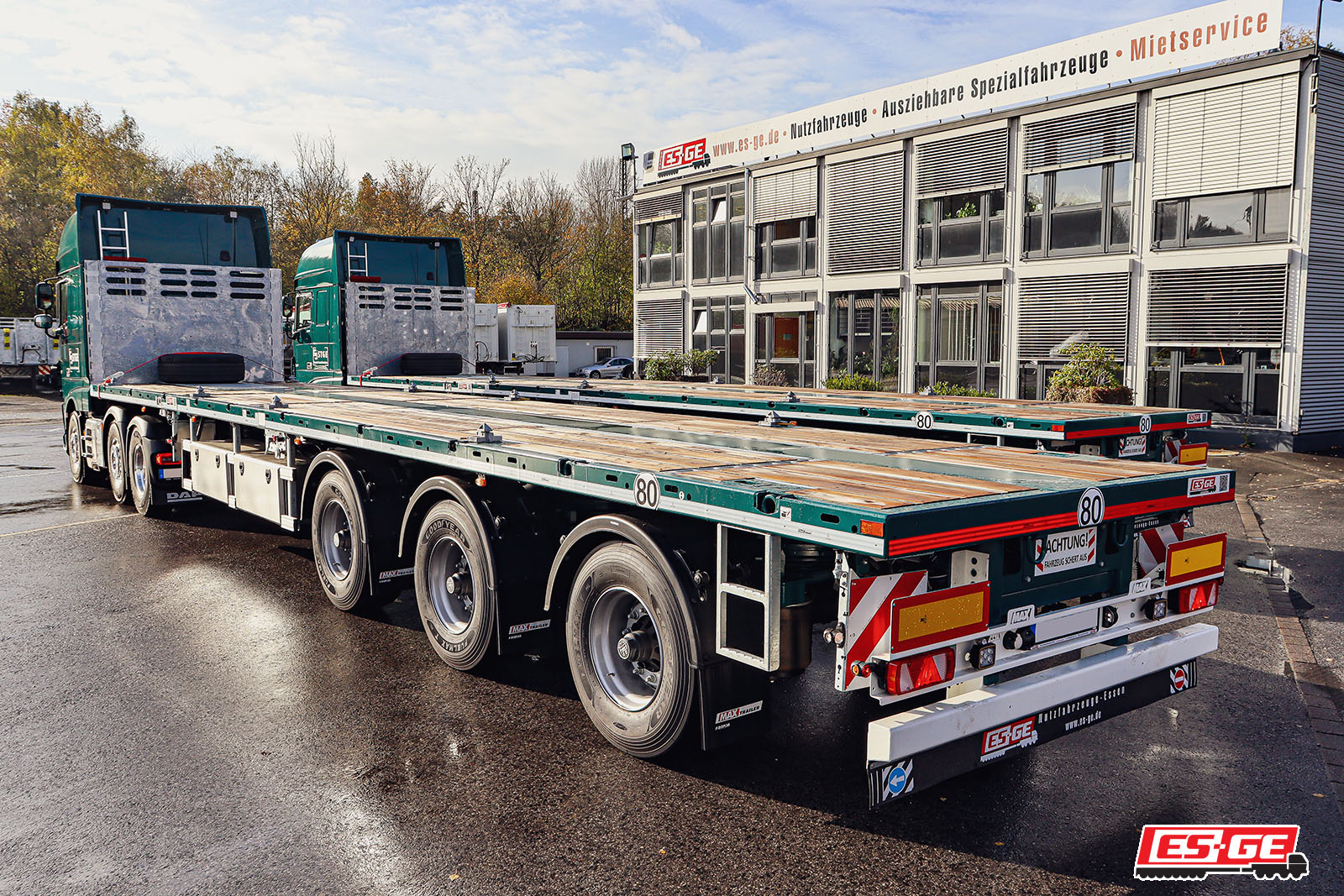 From sea to rail and then to road – or vice versa

The main transport route in Germany is still the road. More than a million trucks move goods of all kinds on our roads every day. Our team works constantly to ensure that our customers’ fleets have technically flawless commercial vehicles available medium and long term. Our rental service, which STGE has also used in the recent past, serves as a useful tool to achieve this. The wide range of vehicles of STGE GmbH offers numerous options for large-volume transports and heavy haulage. During the last months, we were able to contribute to the sustainable modernization of the vehicle fleet of our new old customer within. In total, we delivered 15 vehicles to STL and STGE within a few months. The package includes flatbed semi-trailers, low-loaders, low-bed semi-trailers and semi-trailers or platform semi-trailers. We delivered the latter twice in a double pack: Two MAX trailers MAX210 and two ES-GE semi-trailers. 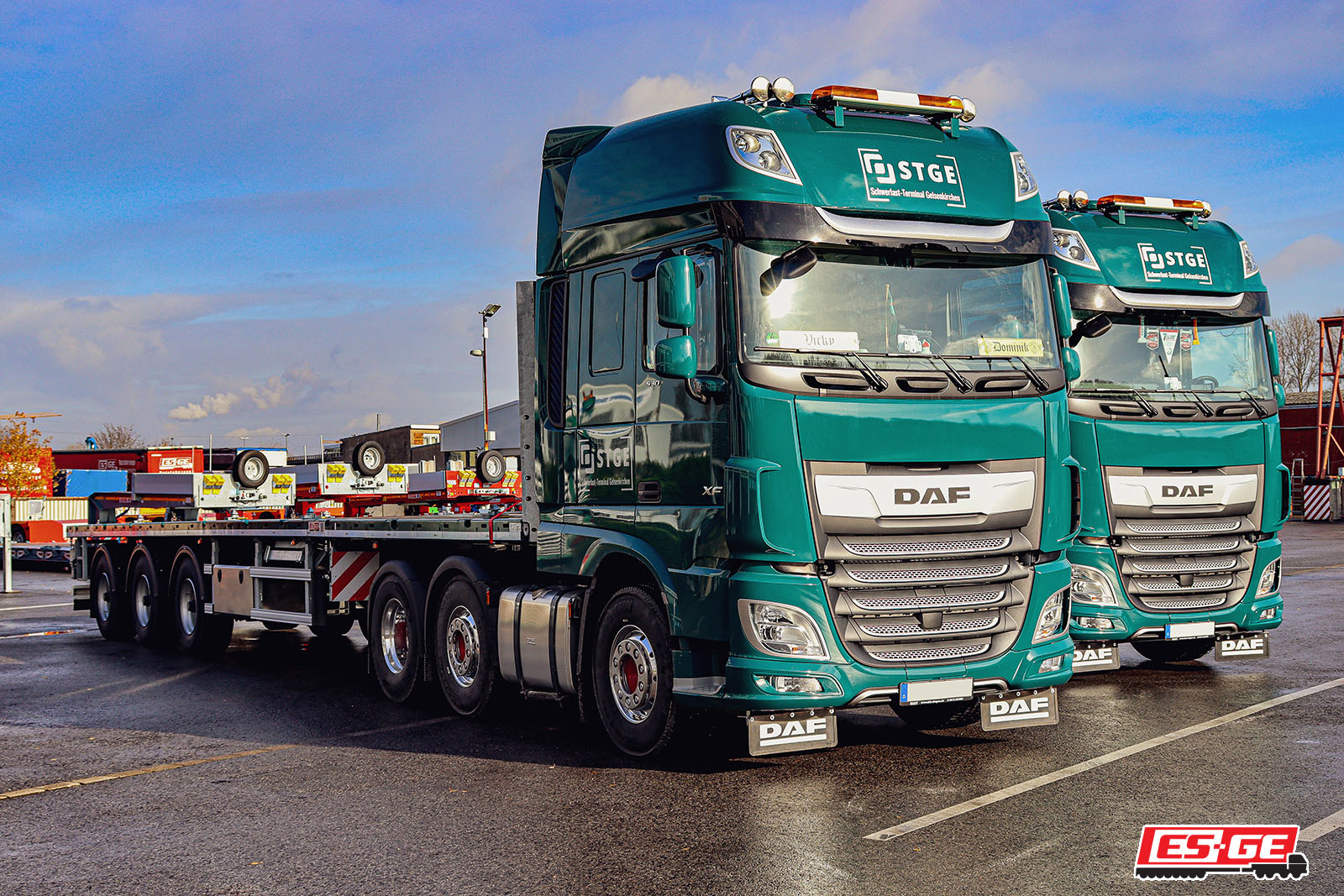 Derived from the basic MAX200 model, the last two digits of the MAX210 model designation indicate that both vehicles are hydraulically steered. Basically, MAX Trailer also offers the MAX210 in a double-telescopic version. We delivered two single extendable MAX210 with hydro-mechanically controlled axles from the BPW brand, all of which have disc brakes. If necessary, the two new vehicles from STGE GmbH can be lengthened by up to approx. 7,500 mm. In normal operation, they have a standard length of approx. 13,600 mm. The dead weight is just under the 10,000 kg mark at around 9,830 kg. Of course, the weight varies depending on the individual equipment. A fifth wheel load of 18,000 kg and three axles with a capacity of 10,000 kg each result in a technically possible payload of just over 38,000 kg. The built-in load gauge for determining the axle loads protects against all possible doubts. 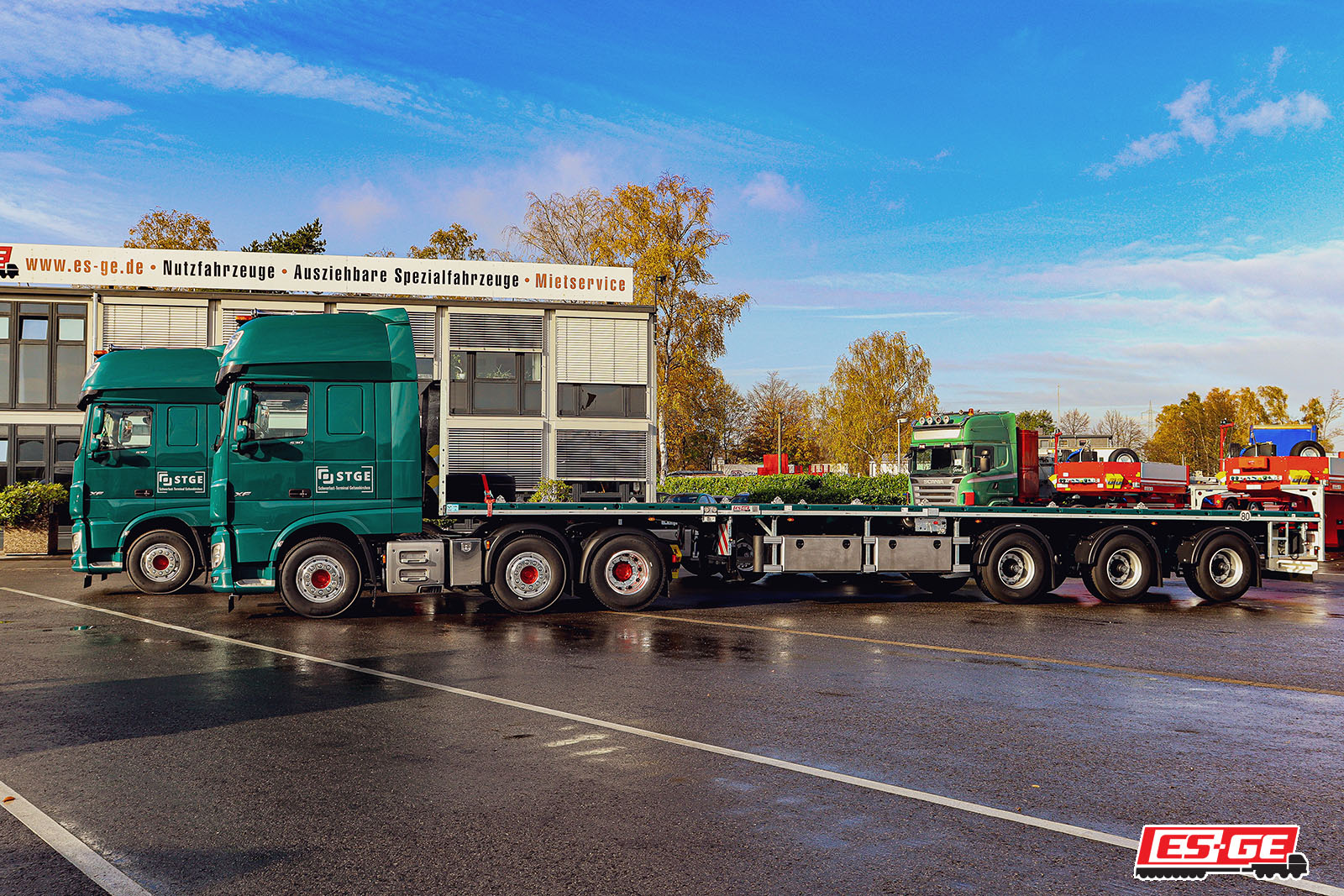 The flexible platform semi-trailer has extensive basic equipment. Additional options can still be configured as part of the modular system established by MAX Trailer. The equipment of the two semi-trailers that were delivered included a radio remote control for the axles. If things get tight, the axles can be readjusted manually. A lane control then ensures perfect straight-line stability. Thanks to the built-in electro-hydraulic unit, a specially equipped tractor unit is not required to operate the manual control. The first axle also has a lift device that is controlled depending on the axle load and the current load status. 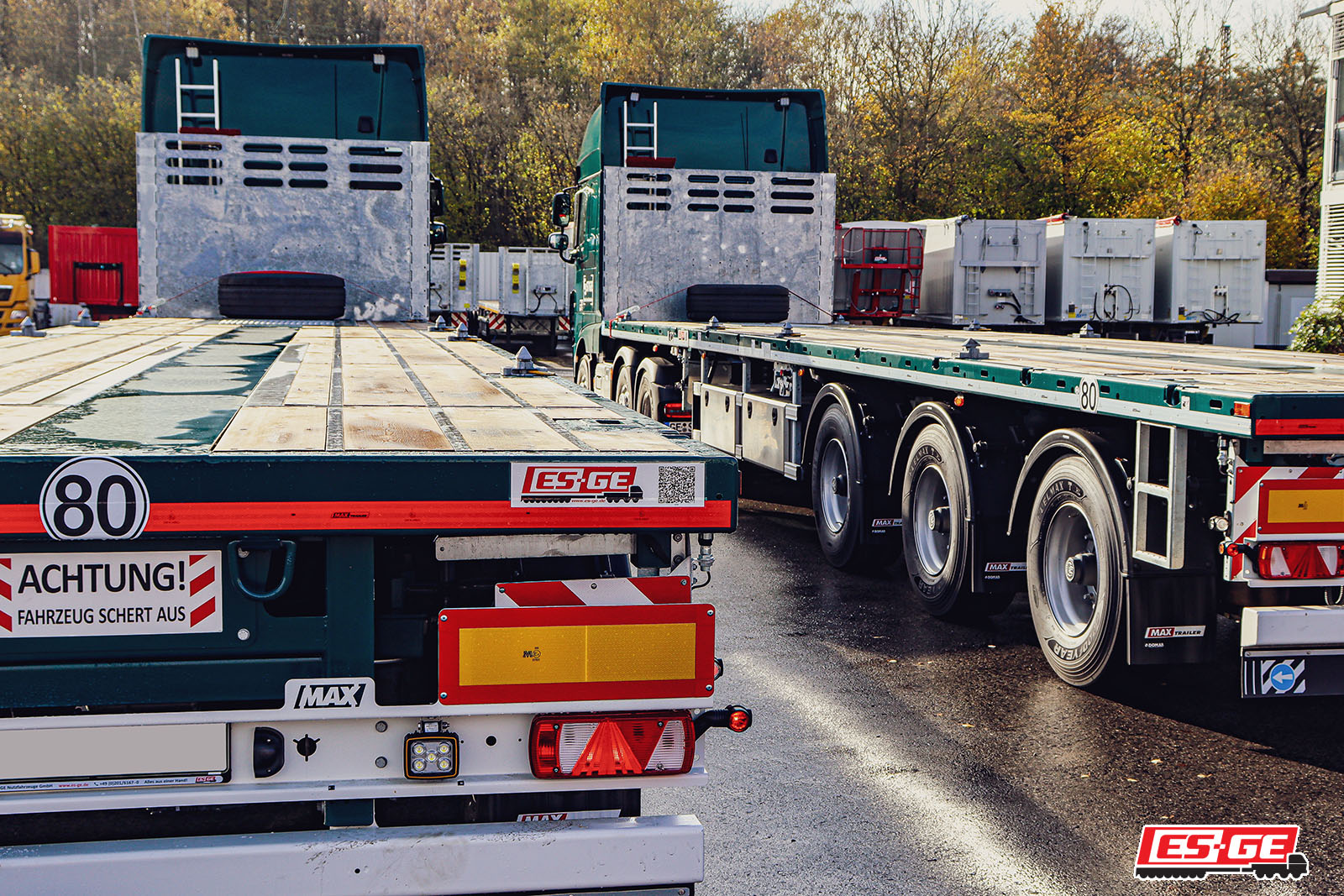 The loading platform, which is almost completely covered with wood, has, among other things, four pairs of stake pocket strips that are mounted in the loading area at right angles to the direction of travel. Stake pockets sunk into the outer frame provide space for a further 20 100 x 50 mm stakes. WADER container pockets in the loading area also offer the option of transporting one or optionally two 20-foot containers. 40-foot containers or 45-foot containers can be transported individually. For the latter, an additional locking point is provided in the central support. At the request of our customer, a total of three tool boxes (INOX) were installed below the frame. 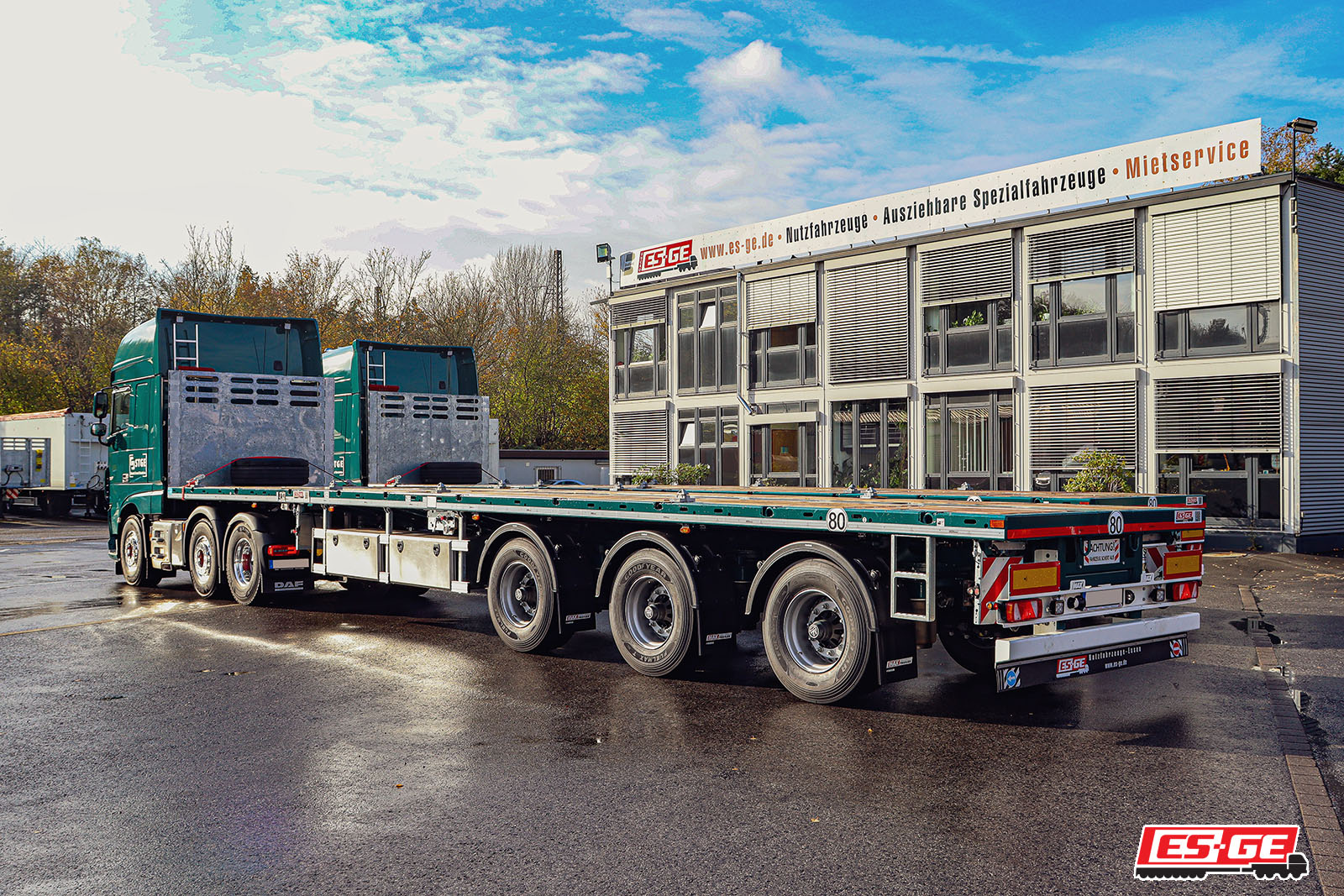 ES-GE semi-trailer in a reinforced version

Just recently, two ES-GE semi-trailers were taken over by STL Logistik AG. Seen from the outside, the four delivered platform semi-trailers are similar. However, the 3-axle trailer of our own brand ES-GE aims at other tasks. In contrast to the two hydraulically steered MAX210, they have three rigid axles and cannot be extended. A special feature, however, is a reinforced frame that is designed for high point loads. The dead weight is approx. 6,390 kg. In connection with the fifth wheel load of 12,000 kg and the 9-ton axles from Gigant, the 3-axle vehicle offers a technically possible payload of approx. 32,610 kg. Depending on the load, the first of the three axles can be raised during operation. The control is load-dependent and fully automatic.

Equipment of the ES-GE trailer

Stake pockets, foldable lashing rings and container locks offer countless options for freight transport. The reinforced frame is covered with a 28 mm thick hardwood floor. It accommodates four rows of stake pockets in the cross beams and another 10 pairs of stake pockets in the outer frame. The built-in container locks enable the transport of a single 40-foot container or up to two 20-foot containers, which can also be placed individually – either flush with the rear or in the middle of the loading area. Thanks to numerous details, the vehicles, which at first glance appear to be simply designed, turn out to be versatile semi-trailers. 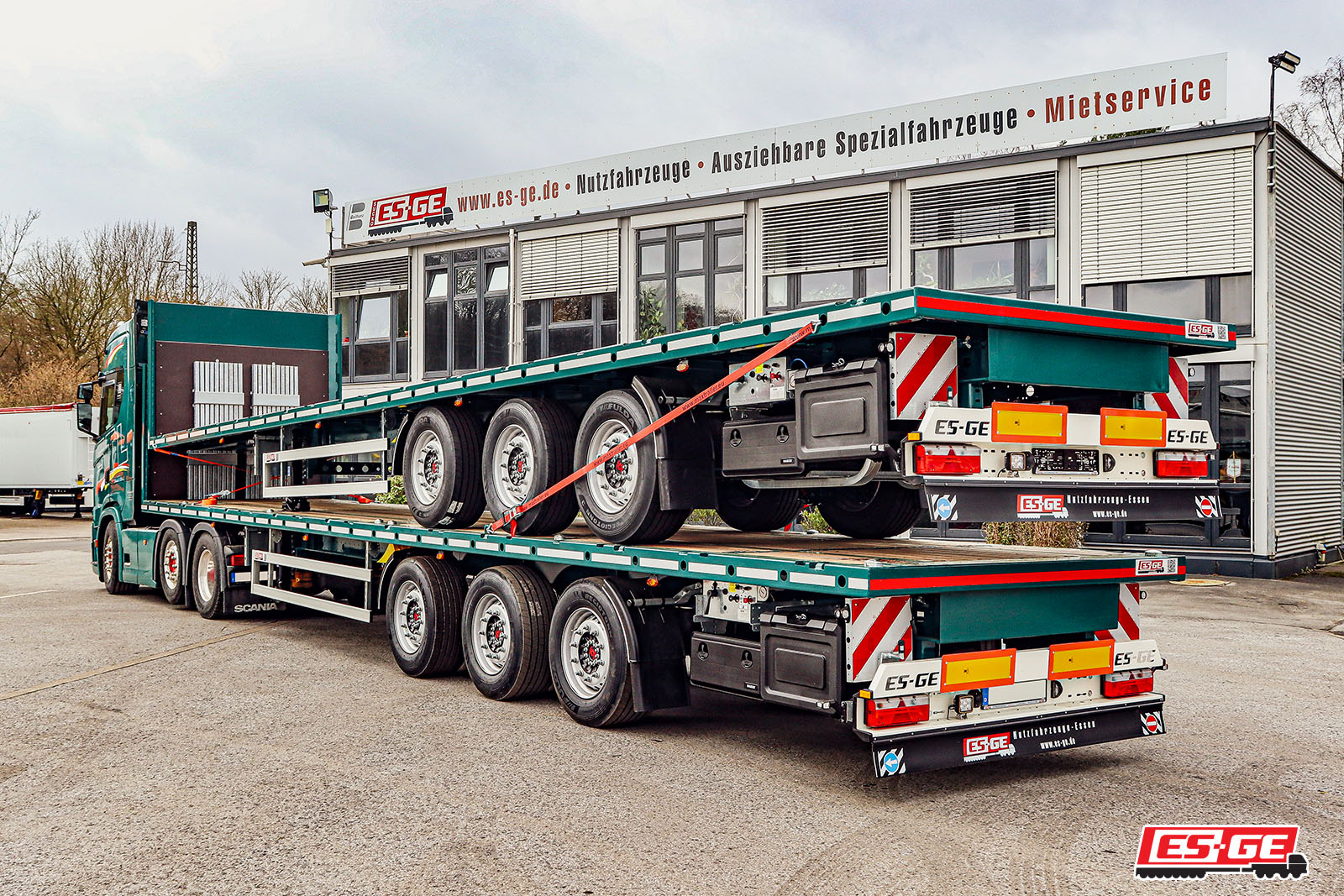 We wish our new old customers always a safe trip!