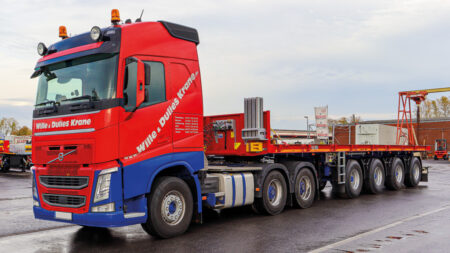 Wille & Dulies Krane GmbH describes itself not only as a crane and transport company, but also as a service provider that plans and implements entire projects. The main tasks of the company from Schleswig-Holstein include e.g. company relocations as well as the planning and the implementation of heavy transport. When implementing the projects, the team has a considerable fleet of vehicles at their disposal. This includes, among other things, numerous mobile cranes that are used for industrial assembly, construction site assembly or also for salvage and the assembly of tower cranes. Apart from their own fleet of vehicles, the connection with Wille Krane GmbH leads to an almost inexhaustible selection of assembly and transport options. The company, which has its headquarters in Kiel, has also been a customer of ES-GE for many years and is part of a group of companies together with Wille & Dulies Krane GmbH. 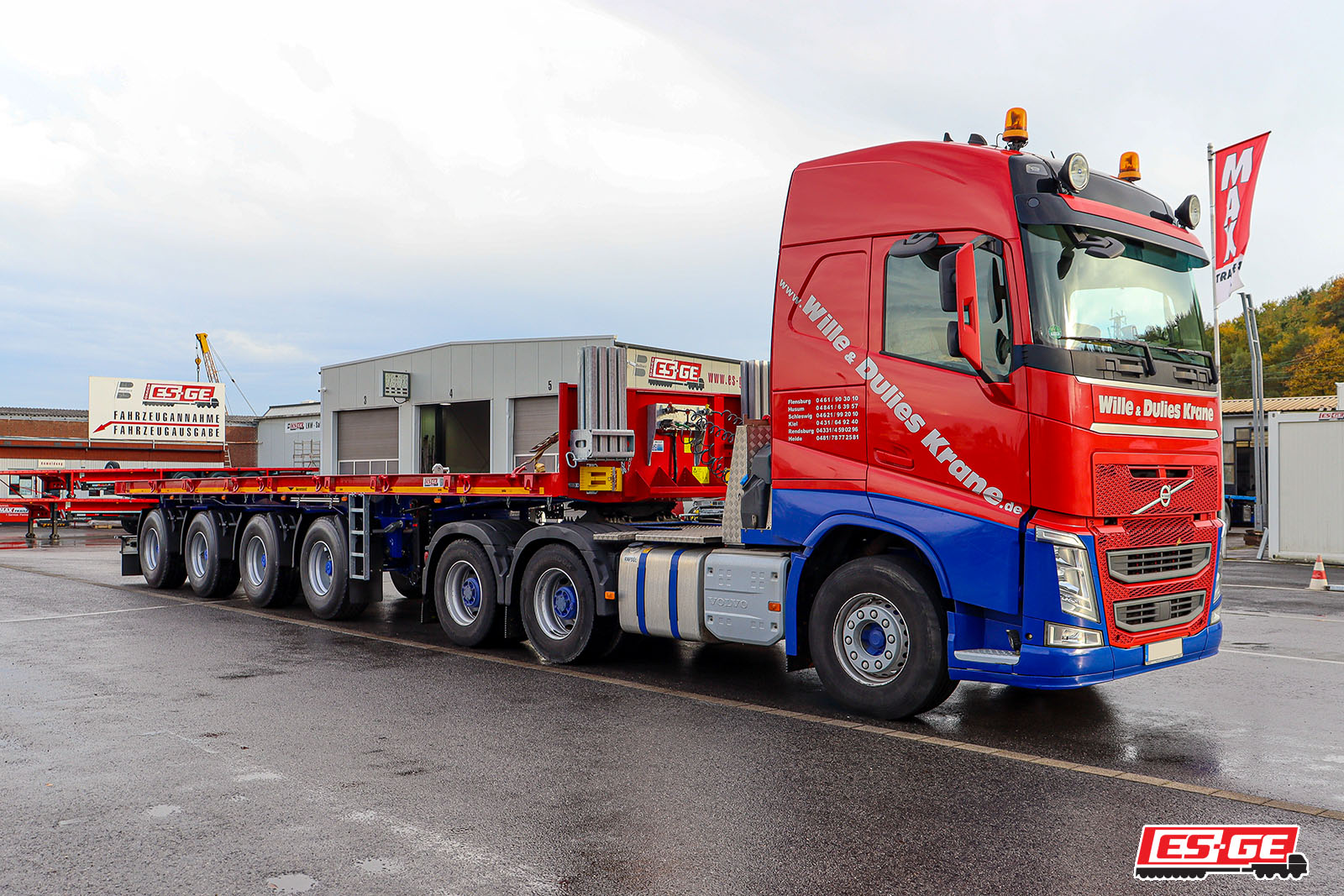 In addition to the mobile cranes, which are primarily used for assembly work, tractor units and trailers of different categories are available for transport tasks. Being a crane company, trucks with loading cranes should of course not be missing. If we look at our database, we can see that Wille & Dulies Krane GmbH added an ES-GE brand vehicle to its fleet 15 years ago. At that time it was a 3-axle ES-GE semi-trailer that started service in the far north. Another trailer from our own brand has been in service for the crane and transport company for a few weeks now. Founded in 1999, the original North German plant now relies on a 4-axle ES-GE ballast semi-trailer for its operations, which was individually configured on behalf of our customer. 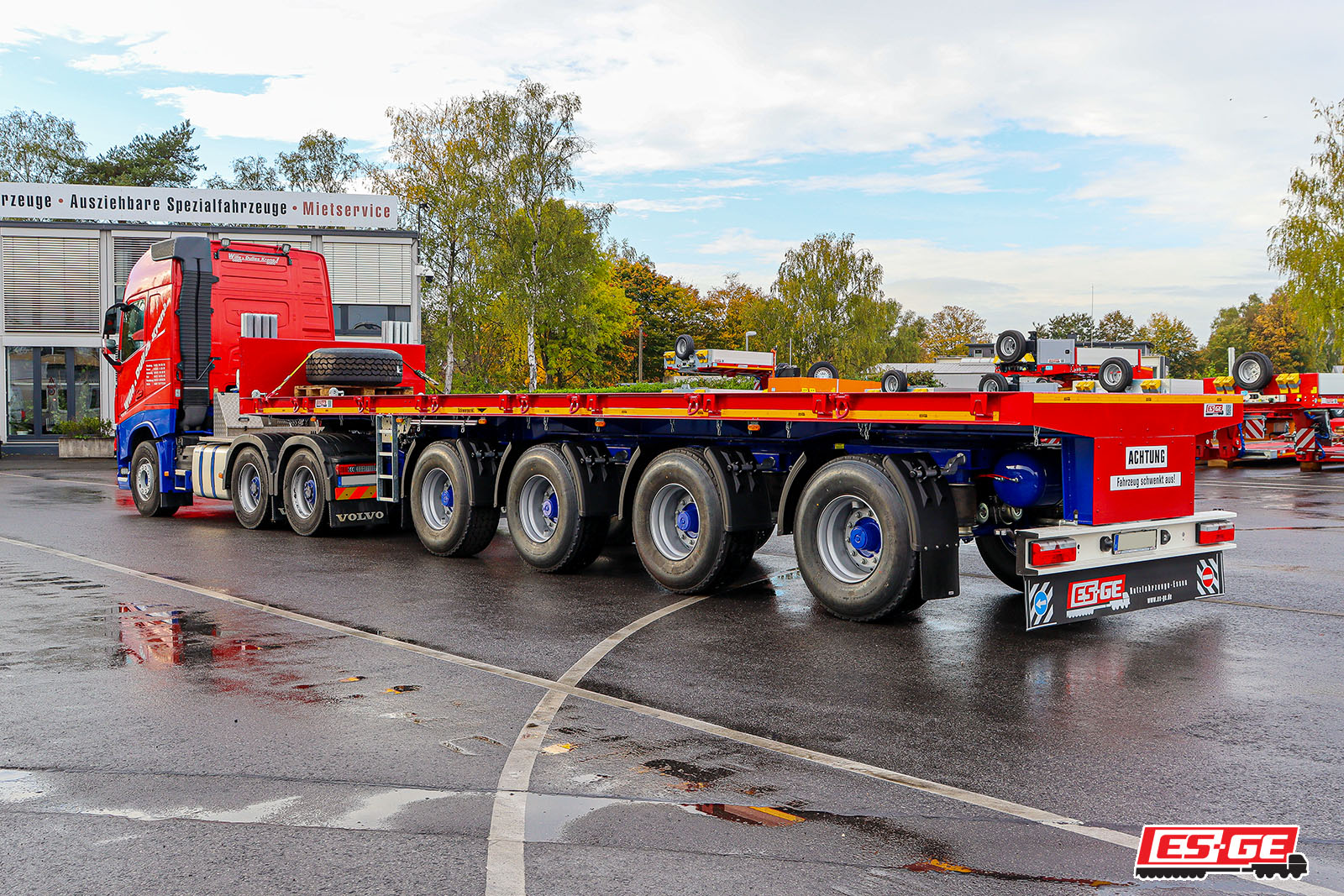 The ballast semi-trailer we have delivere is primarily used for the transport of crane ballast. However, the vehicle is also suitable for other goods, such as crane elements. The technically possible total weight of the 4-axle vehicle is 64,000 kg. This value is made up of the technically possible maximum fifth wheel load of 24,000 kg and the axle loads of 10,000 kg each. The delivered vehicle weighs around 10,500 kg empty. Depending on the equipment, the basic weight of the vehicle varies and with it the payload. Based on the above mentioned values, the trailer offers a technically possible maximum payload of 53,500 kg. 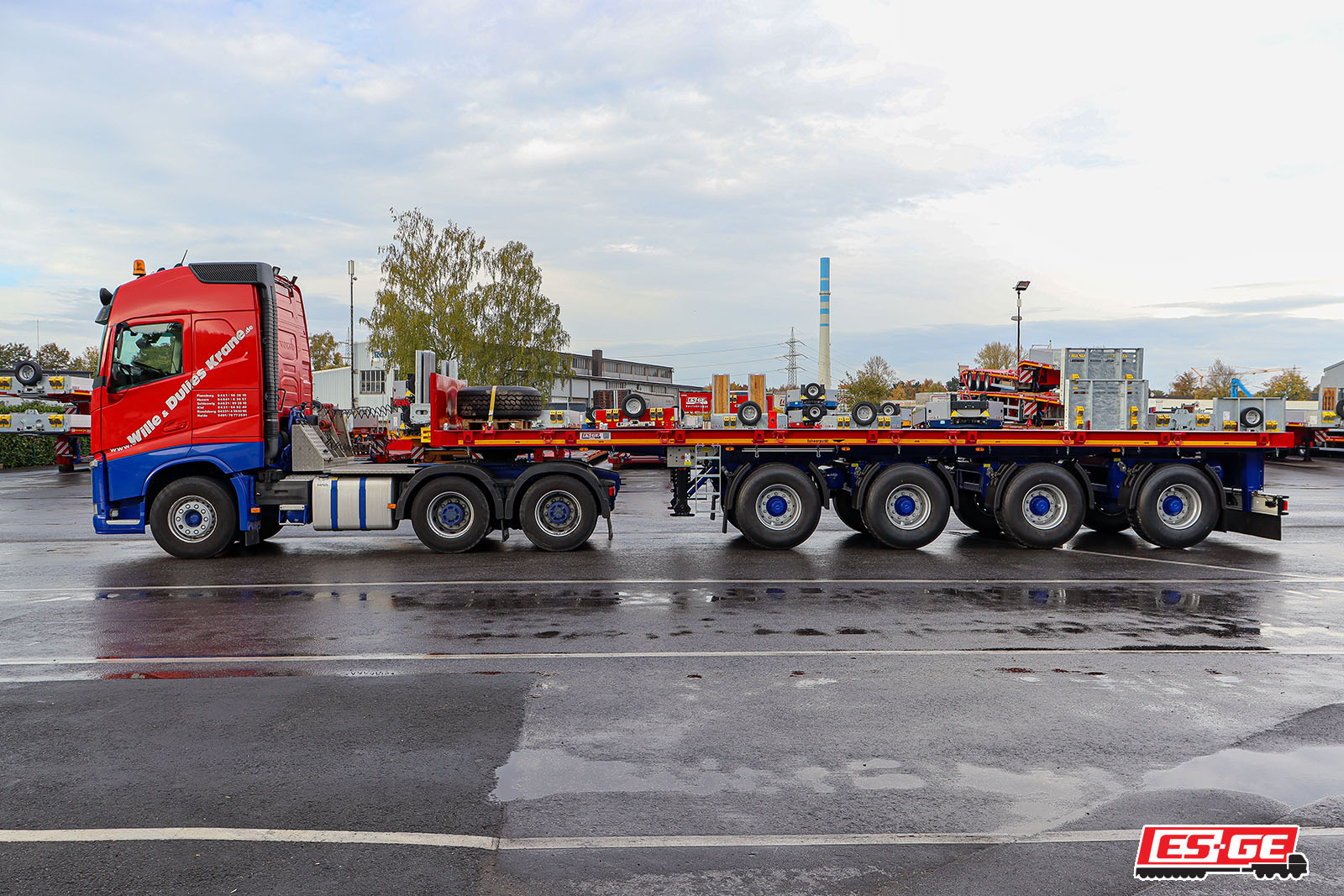 The approximately 11,550 mm long vehicle is supported by four axles. In total, they offer a maximum capacity of 40,000 kg. Axles two, three and four are controlled with the help of a mechanical forced steering system from Tridec. The turntable forced steering ensures a maximum steering angle of approx. 20°, 30° and 45° – based on axles two, three and four. Deviating from the standard, the ballast semi-trailer is also equipped with a lifting axle. The air-sprung axles all have drum brakes controlled by an air brake system by Knorr. 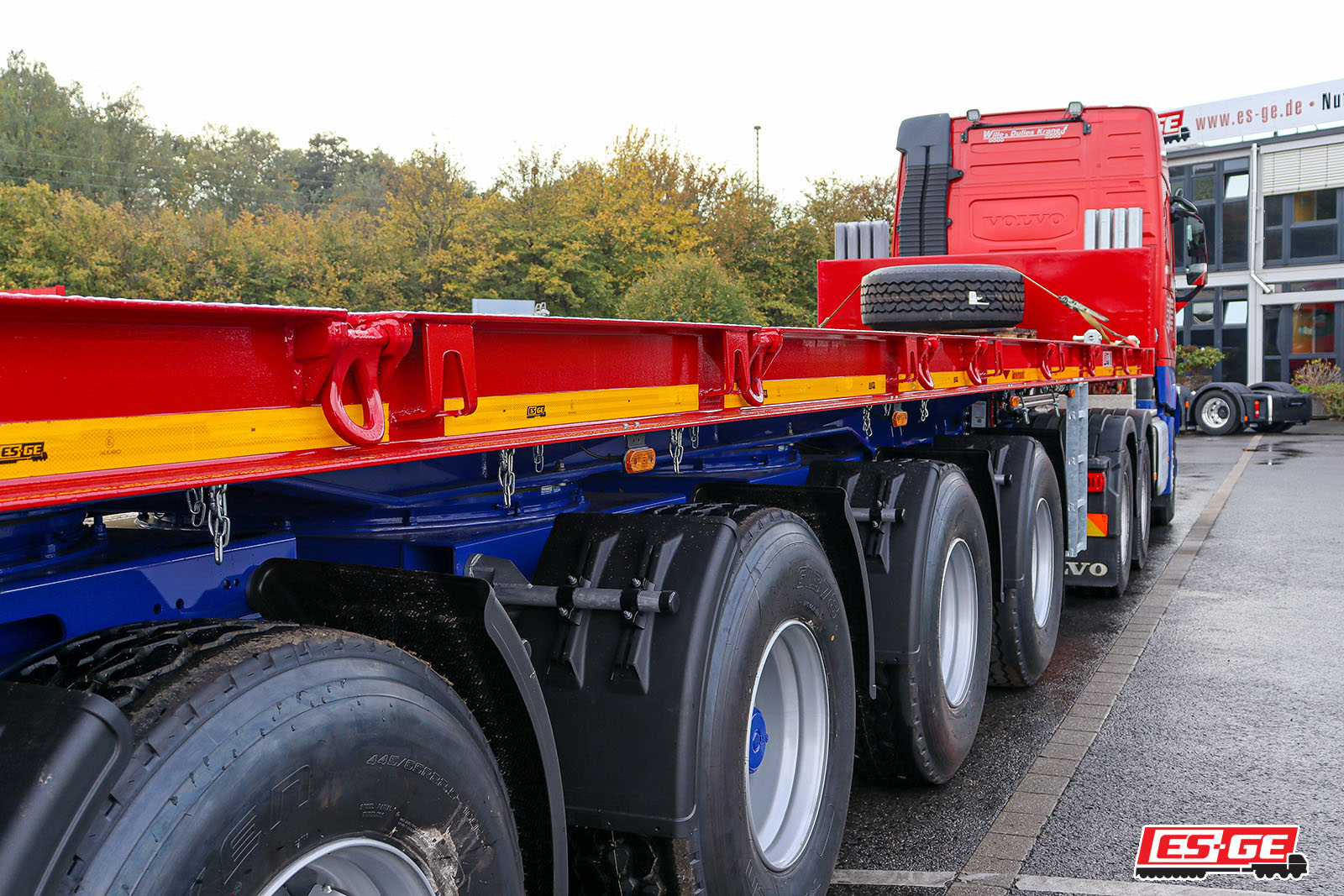 The loading area consists largely of 28 mm thick hardwood floor with omega profiles. There are numerous lashing points and load securing devices on the loading area and in the metalized frame. This includes a total of 22 stake pockets, hook plates and lashing rings with different strengths. The breaking load of the lashing rings sunk into the ground is approx. 14,000 daN. The maximum tensile force of the RUD-SLP lashing points, which are anchored in the outer frame, is approx. 10,000 kg. At the request of Wille & Dulies Krane GmbH, four Laxo sleeves were embedded in the floor for the safe transport of an 8′ container. In this case, the appropriate container locks are of course included. The total of 16 stakes supplied can be accommodated in the stake-magazine. It is mounted on the front wall especially for this purpose. 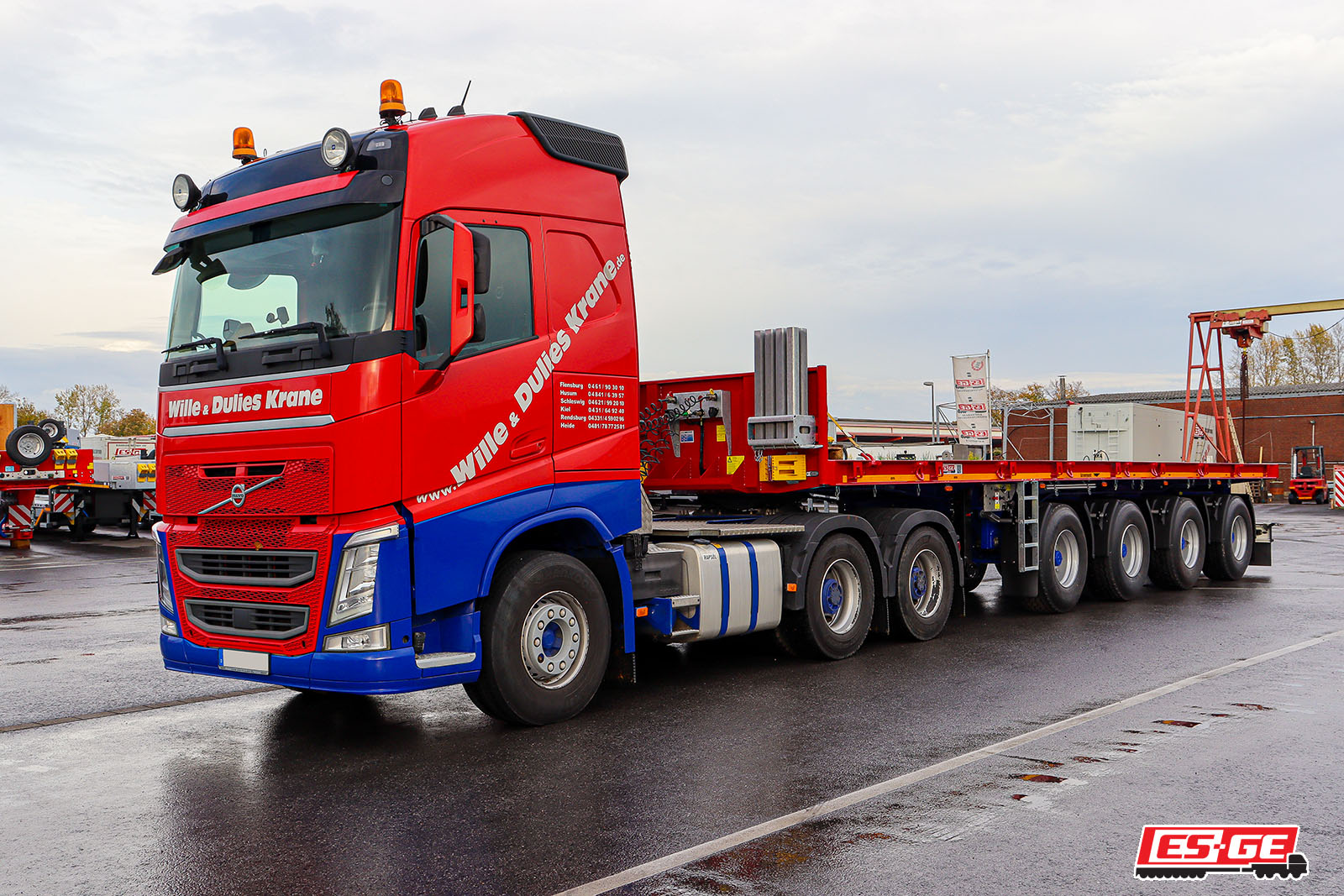 We wish the team of Wille & Dulies Krane GmbH a safe journey at all times!